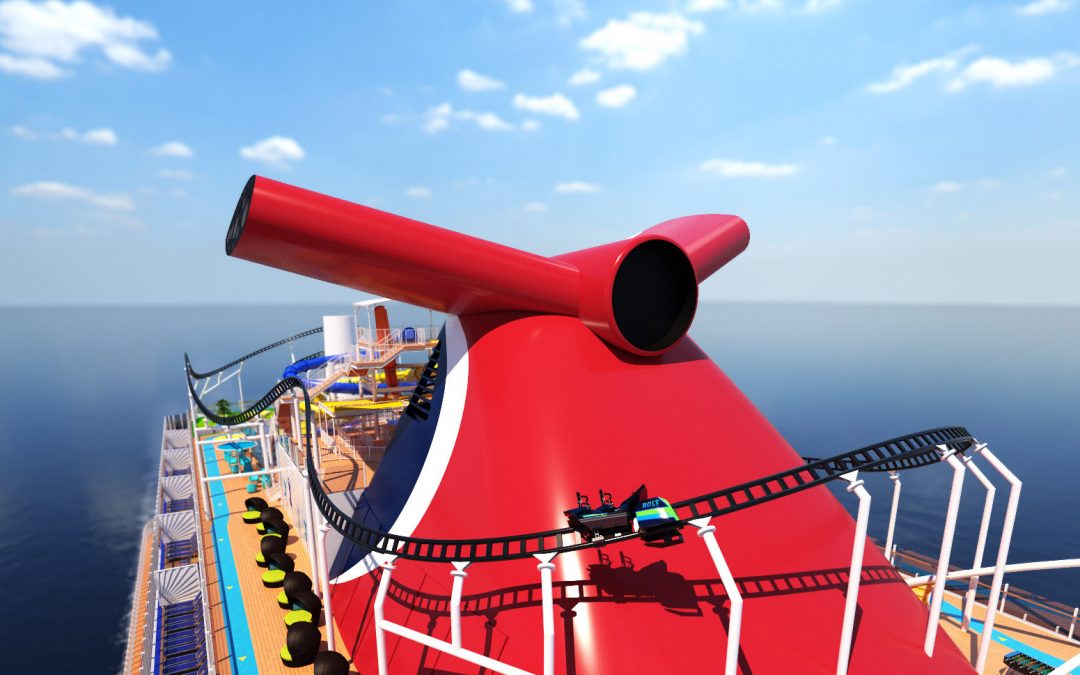 Carnival’s newest ship, the Mardi Gras, debuts in 2020 and boasts an array of new features, none as innovative as their BOLT roller coaster.

Located on the uppermost deck and elevated 187 feet above sea level, the ride will allow passengers to reach speeds of up to 40 miles per hour along its, “nearly 800 feet of exhilarating twists, turns and drops,” according to Carnival.

Passengers will have a 360 degree view of their surroundings on this unique ride. Also unique to the coaster are controls allowing riders to regulate their own speeds, accelerating and decelerating as they ride.

As in traditional theme parks, a camera will snap pictures of guests as they enjoy the ride. Carnival is also adding an element of competition, posting the speeds of riders after each run.

The coaster was built by the German company Maurer Rides, which has built coasters for attractions around the world. The company is known for inventing the first belt-only restraints for inverted rides in 2004.

Carnival is promoting the roller coaster as one of several new features on Mardi Gras. The ship is organized into six zones: Grand Central, French Quarter, La Piazza, Summer Landing, Lido and The Ultimate Playground, each highlighting something new as well as some Carnival guest favorites.

Mardi Gras continues Carnival’s relationship with celebrity chef and philanthropist Guy Fieri with the ever-popular Guy’s Burger Joint and the Pig & Anchor Smokehouse Brewhouse. It also caters to guest favorites with expanded sushi offerings in addition to the BlueIguana Mexican Eatery, the Seafood Shack and 24-hour pizza. Additionally, the ship has Carnival’s largest WaterWorks aqua park and an enlarged SportSquare.

Among its new attractions are a dedicated Punchliner Comedy Club, a New Orleans jazz club, a new celebrity partnership and eateries to be announced soon and, of course, the BOLT.

Passengers can now book travel on one of Mardi Gras’ inaugural sailings, including its nine day maiden voyage from Copenhagen, Denmark to Southampton, England.

The ship will then be moved via a 15 day voyage from Southampton to New York. Once in New York, guests can book a six day cruise to Portland, Maine and Saint John, New Brunswick. A final 15 day sailing will relocate the ship to its home, Port Canaveral, FL. Mardi Gras will them make year-round sailings to the Caribbean.

For those who love a ship with that extra something, the Mardi Gras promises to deliver an exciting new attraction with the BOLT. The only question for cruisers everywhere is, what will they think of next?