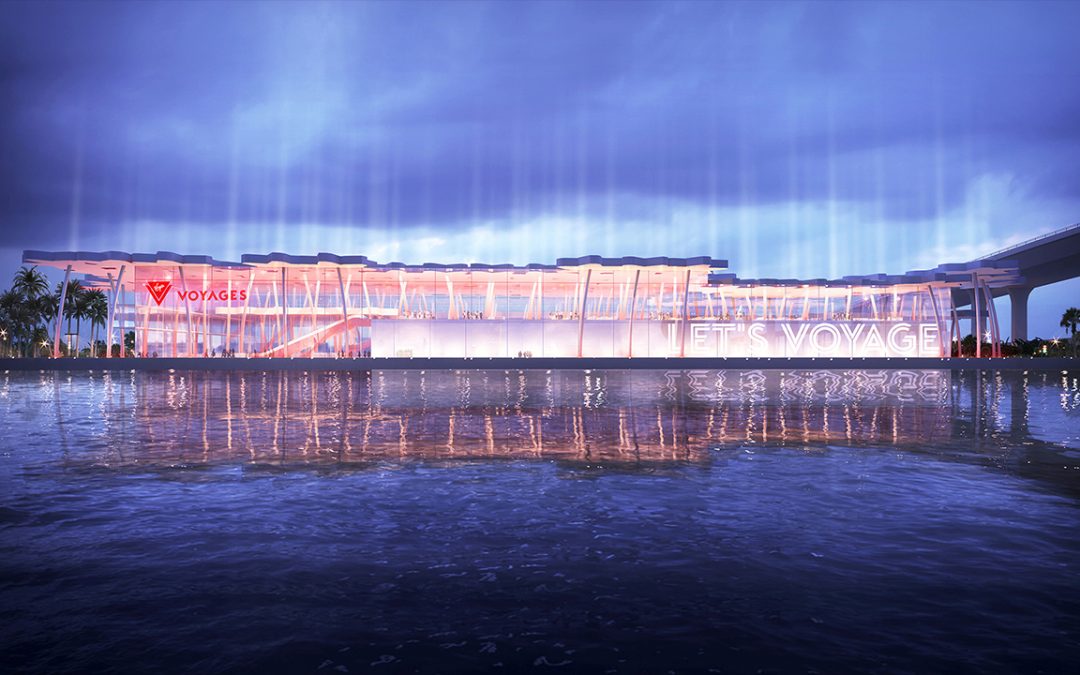 Artist’s rendering of the west side of Virgin Voyage’s new proposed terminal in PortMiami. (Image provided by Virgin Voyages.)

Virgin Voyages is the Virgin Group’s first foray into cruising, and the company seems eager to bring their hallmark style and youthful appeal to the project.

Working with Miami architectural firm Arquitectonica, the terminal’s design is meant to “honor the Magic City,” according to Virgin Voyages, especially through design elements that mirror Miami’s trademark look and feel.

Set to begin construction in 2019, the terminal’s exterior is ringed with arched supports and its roof line shaped like palm fronds. The two-story interior, viewed through four walls of storm-proof glass, is similarly supported by arched columns that look uncannily like the trunks of palm trees, creating the illusion of a monochrome shaded palm grove.

Meant to be a place for customers to enjoy a seamless transit experience — whether embarking or debarking from the Scarlet Lady or future ships — the terminal will provide a cool shelter from the hectic heat of Miami.

Located on Dodge Island between downtown Miami and Miami Beach, guests will be able to arrive for their Virgin cruise via private vehicle, taxi, limo, shuttle bus or ride share, with designated VIP drop off areas.

The Scarlet Lady, the first of two planned ships by Virgin Voyages, is expected to cruise to Havana, Cuba, with additional plans announced for the purchase of a private island in the Bahamas.

The terminal at PortMiami is consistent with the larger image Virgin Voyages hopes to communicate to future customers, that of a sleek, sexy, new kind of cruise line. Virgin has announced that their cruises will be for guest 18-years-of-age and older, and the Scarlet Lady will feature such innovations as on-demand restaurant dining only (bye bye buffets!) and an on-board tattoo parlor.

PortMiami is currently home to 22 cruise lines, and millions of passengers pass through the port each year. 55 ships berth on Dodge Island with destinations ranging from Mexico to the Caribbean, the Bahamas and beyond.

Virgin has announced that they will begin accepting bookings on the Scarlet Lady from the general public on February 14, no doubt in a nod to those adults looking for an extra-romantic gift this Valentine’s Day.